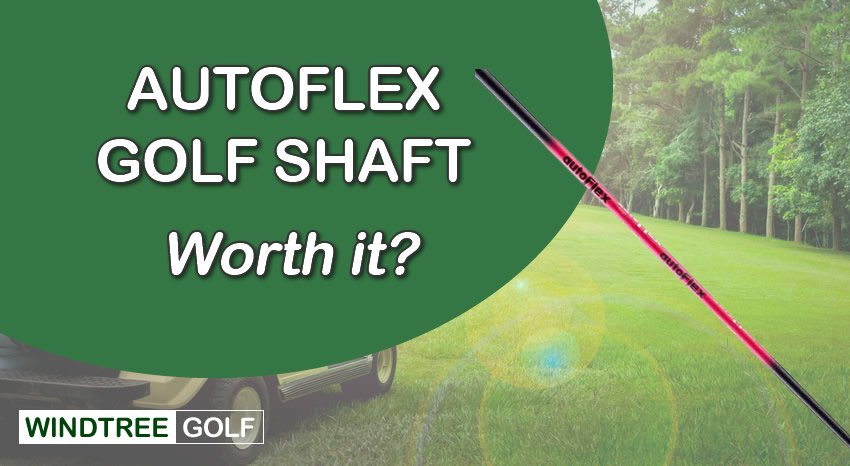 As well as considering the brand of the golf clubs you buy, it’s important to think carefully about the shafts that you add to your clubs. After all, your chosen shafts can make a huge difference to your ball striking.

And one brand of shaft that has grown in popularity in recent times is AutoFlex, which originally made a name for itself in Korea.

Given the current hype surrounding AutoFlex golf shafts, we thought it would be a good idea to review their use and ascertain whether or not they’re worth the money they currently cost.

By the end of this piece, you will have all the information you need about AutoFlex golf shafts and be able to come to a decision about whether or not they’re a good option for your golf clubs this season.

What is the AutoFlex Golf Shaft?

The AutoFlex golf shaft has been designed to help slow and average swing golfers hit the ball further without swinging harder. The shaft is between 20 and 30g lighter than standard driver shafts, which helps to increase speed and decrease the strain on your body.

As the name suggests, AutoFlex shafts are also more flexible than standard shafts, which is ideal for recreational players who are looking to increase the consistency of their ball striking.

The shaft is also one of the most sought-after in the game right now as it comes in two appealing designs – bright pink and black or rainbow. It gives off pretty strong Bubba Watson vibes and looks great in the bag.

So, if you’re wondering what all the fuss is about, we explain everything you need to know about the AutoFlex golf shaft in the following sections.

Checkout the video from Rick Shiels as he reviews one of the most expensive shafts on the market!

Is the AutoFlex Shaft Legal?

The AutoFlex shaft is 100% legal, and you can order it online to equip your golf clubs. It’s always good to consider the legality of specialist equipment before placing an order, as you don’t want to make your clubs illegal for use in club competitions by adding the wrong shafts, grips, or even club heads.

Golfers may also like:  Golf Shaft Adapter: How to Remove & Fit Quickly!

For a shaft to be illegal, it has to fall outside the rules stipulated by the USGA, as they have the final authority on what type of equipment golfers are permitted to use out on the course.

In regard to shafts, the USGA confirms that they must be straight and can only bend in such a way that “the deflection is the same regardless of how the shaft is rotated about its longitudinal axis”.

The way that the AutoFlex shaft has been manufactured means that you don’t need to worry about its legality, and it’s perfectly fine to add to your clubs if you so wish.

Yes, in addition to their bright and awesome look, AutoFlex shafts are also popular because they’re regarded as high quality. They have been engineered to ensure they are lightweight and flexible, which ultimately can lead to more ball speed when you make contact with the golf ball. 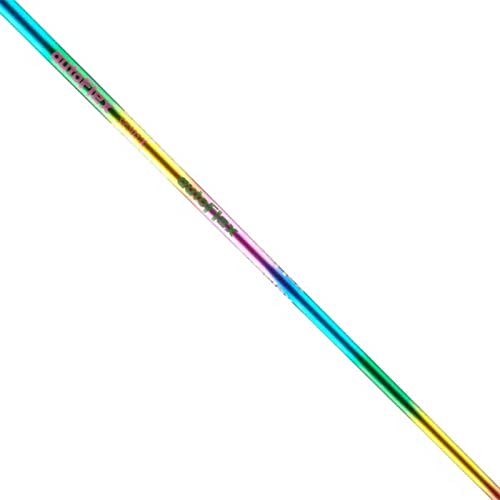 As a result of a secret formula – their words, not ours – AutoFlex shafts are lighter without compromising on distance. Typically, when you switch to a lighter shaft, you won’t be able to hit the ball as far, but this isn’t the case with AutoFlex shafts.

It’s also been noted that the AutoFlex shaft helps golfers hit draws as opposed to fades. This is an important point to note if you’re a mid-low handicapper and are looking for a shaft to help you achieve the desired ball shape out on the course.

How Do You Hit an AutoFlex Shaft?

The ideal way to hit an AutoFlex shaft is to adopt a lighter swing weight with a less aggressive transition. This is because AutoFlex shafts have been engineered for golfers with slow to medium swing speeds in mind.

You also need to consider the fact that AutoFlex shafts typically favor the draw, which will influence the trajectory of your shots. We’re not entirely sure why the shaft favors a draw, but it’s clear that there’s a pronounced curve on iron shots and drives.

Other than this, you can hit an AutoFlex shaft just as you would hit any other golf club. The high build quality of the club, as well as the hidden Korean technology, means that this shaft is a great option, particularly for low and mid handicappers who are looking to improve their ball striking.

Golfers may also like:  The Best Driver Shafts for Extra Distance

How Much Are AutoFlex Golf Shafts?

The driver shaft itself is $790, while iron shafts are $210 each. What’s more, fairway wood shafts are currently priced at $625, while hybrid shafts start at the same price. One of the biggest drawbacks to AutoFlex golf shafts is that they’re expensive.

The fact that very few fitters use AutoFlex shafts means that you have to order them directly from the manufacturer, which partly explains the high cost. Still, they’re one of the most sought-after golf shafts for a reason, and they undoubtedly help to increase your distance off the tee. 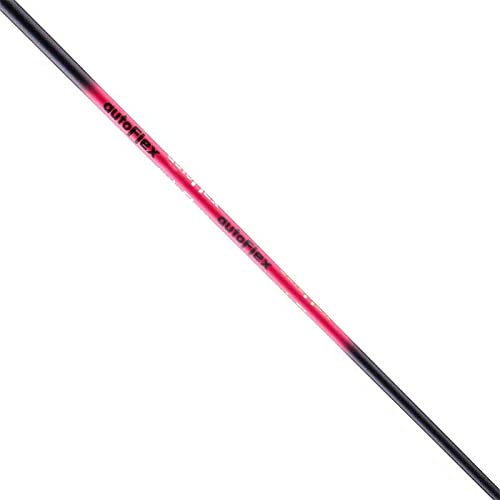 But equally, if you’re of the opinion that $790 for a club shaft is far too much to pay, then you’re certainly not alone. Many forums are filled with discussions surrounding the expense of AutoFlex golf clubs, so they’re certainly not for everyone.

But if you can justify the expense and want to level up your shafts from a performance and aesthetic viewpoint, these high-quality shafts are well worth thinking about.

Where Can You Buy AutoFlex Golf Shafts?

The best place to buy AutoFlex golf shafts is directly from the manufacturer’s website which ensures authenticity. You can choose your shaft length as well as your color (black/pink or rainbow), and you can expect your delivery within 5-7 days.

However, you should be mindful that you are required to pay $85 for FedEx Priority delivery, which adds to the significant price tag even further.

Another option is to get in touch with a club-fitter in your area to ask them if they can source AutoFlex golf shafts on your behalf. However, if you do this, it’s likely to cost you even more, as there will probably be a mark upon the shafts.

Given their increase in popularity in recent times, there’s no doubt that AutoFlex shafts will soon be available at more golf fitters in the near future, so we might also see a reduction in price before long.

Does Club Champion Have AutoFlex?

No, according to a Forbes piece, the founder of Club Champion, Nick Sherburne, considered offering AutoFlex to its customers only to decide against it. Sherburne was actually critical of the AutoFlex brand, labeling it as “Ego-Flex”.

Instead of AutoFlex, Club Champion stocks fifty other brands that are available for much more affordable prices than the expensively-priced Korean brand. Club Champion shafts have long been trusted by recreational players, so it’s little surprise that they haven’t jumped straight into bed with the latest brand to gain popularity.

When you go to a Club Champion store – there are more than 88 in different locations in the US – you can be sure that your clubs will be fitted by a pro and that you will get a choice of various shafts that may also increase your ball striking capability.

So, while it doesn’t seem like AutoFlex will be added to the Club Champion lineup any time soon, you can still find an excellent choice of shafts at the leading club fitting service in the United States.

Do Any Pros Use AutoFlex Shafts on Tour?

Lots of pros have opted for AutoFlex shafts on Tour, and the list of names includes Branden Grace, Louis Oosthuizen, Adam Scott, Ernie Els, and Fred Couples. Such names are a coup for Dumina, the team behind AutoFlex. It signifies just how far the Korean brand has come.

Something unique about AutoFlex shafts is that they consider only average swing speed when ascertaining the ideal length of the shaft for all players, regardless of ability. This is notably different from other branded shafts that take into account factors including CPM, torque, and spine alignment, among other things.

Ultimately, although AutoFlex shafts aren’t widely used on Tour, they are still represented by a handful of players. It remains to be seen whether the brand will gain more support on Tour in the years to come as technology continues developing and golfers look for more opportunities to consistently drive the ball further.

Should I Buy an AutoFlex? (are they worth it?)

AutoFlex is a brand that has emerged from Asia in recent times and has even made an appearance on the PGA Tour. AutoFlex shafts are favored by some golfers because they enable fitters to create the perfect clubs for your game based on your swing speed alone.

If you can afford the price of AutoFlex shafts, there’s no doubt that they can improve your game, particularly where the length of your ball striking is concerned.

So, if you’re looking for new shafts for your golf clubs and are hoping to improve your ball striking, AutoFlex is a brand that’s well worth considering.