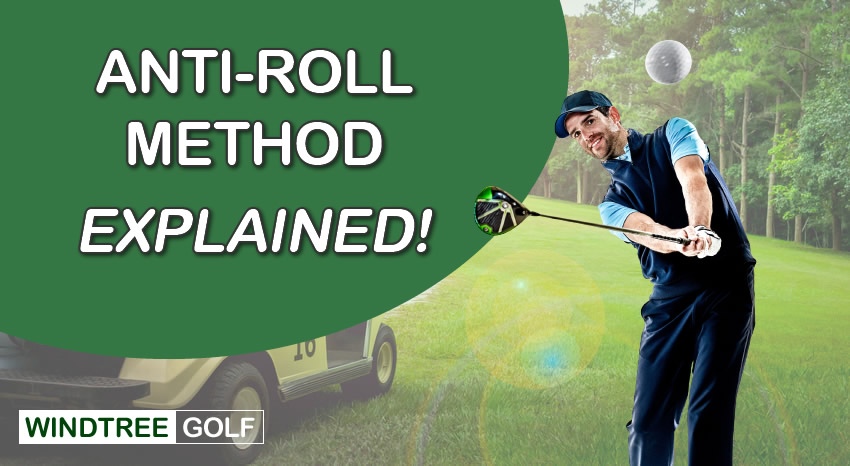 There’s a lot of debate in the golf world about whether or not you should roll your forearms in your follow-through. Some believe it causes the ball to shoot left, while others think it’s part and parcel of a natural swing.

Whatever your viewpoint, it’s worth considering the anti-roll method in golf, as it might end up benefitting your game.

We explain everything you need to know about the anti-roll method in golf and provide you with some top tips about how to correct your setup.

What is the Anti Roll Technique vs Method in Golf?

The anti roll technique in golf refers to the way you release the golf club at the point of impact. You can either release the club by rolling your forearms through the shot which is called anti roll method or by coming in square, which is referred to as the anti-roll technique.

Both methods are used on the PGA Tour, with Jordan Spieth preferring an anti-roll approach and Rory McIlroy opting for a roll method. As such, both methods can work; it really just depends on your personal preference and how you want your golf swing to feel.

In the meantime, checkout this great video from Clay Ballard as he shows the anti roll method vs technique in more detail:

Should I Roll My Wrists in Golf?

Yes, executing the right amount of wrist-roll is super important to the execution of straight golf shots. You should take some practice swings and get a feel for how your wrists are moving before stepping up to take your shot.

When you execute your golf swing, you need to roll your wrists on the follow-through to some degree. Keeping them completely straight is nigh on impossible, so you will have to account for at least a little bit of motion as you complete your shot.

Golfers may also like:  Rule of 12 Chipping in Golf (is it Accurate?)

If you’re a right-handed golfer, your left wrist rolls naturally over as you transition through the golf swing and execute your follow-through. While a wrist roll in itself isn’t a bad thing, you do need to control your range of motion.

If you roll your wrists too forcefully and push down in your follow-through, you’re much more likely to hook the ball to the left. Conversely, if your wrist doesn’t roll enough, you will push the ball or slice it out to the right.

It’s important to make the necessary corrections before you execute your shot for obvious reasons!

How Do I Stop Rolling My Wrists in The Golf Swing?

If you feel like you’re rolling your wrists too much in the golf swing, you can correct your setup, which will prevent you from hooking the ball as much. One of the best ways to prevent the roll is to push your hands out at the point of impact, much like you would in a baseball swing.

When you hit through the ball, you need to keep your arms straight and pointing towards the target. This is in stark contrast to rolling your forearms, which is something that many beginner golfers tend to do as it feels more natural.

Switching from a rolling release to a square technique isn’t easy, and it will require lots of practice out on the range. If you overcompensate by pushing your wrists too far out, you will start slicing the ball as the clubface will be too open.

Getting the right amount of roll in your wrists is a delicate balance, as too much or too little will result in wayward shots!

As you look to reduce the amount of roll in your wrists, dedicate sufficient time out on the range to practice. You may even want to schedule a lesson with a golf coach if you’re struggling to straighten up your shots.

Should I Roll My Hands in the Golf Swing?

When your hands are too loose, it’s very difficult to exert the required level of control over your golf shot. Most people who approach the ball with weak hands will find that the ball flies way left or way right, depending on what happens at the point of impact.

Golfers may also like:  What Age to Start Golf Lessons? (Answered!)

Also, rolling your hands excessively will cause the ball to shoot left, and it will affect your distance and trajectory. As much as you can, you should keep your hands tightly wrapped around the club and let your wrists do the work in the follow-through.

If you’re struggling with your swing and find yourself hooking the ball to the left, it could be that you’re allowing your hands too much control.

If this is the case, consider tightening things up and try a square follow-through, where you don’t roll your forearms anywhere near as much. While it doesn’t work for everyone, this small correction can reduce the amount that you hook the ball.

Should You Roll Your Forearms in The Golf Swing?

But again, not every golfer rolls their forearms as much as others. We’ve already introduced the fact that Jordan Speith deliberately limits his forearm roll and maintains a very square stance at the point of release. Keeping your forearms square reduces clubhead motion and means things are much tighter in your follow-through.

It’s akin to a baseball swing or even a cricket shot in many respects, and it certainly won’t feel comfortable for everyone!

Unless you find that you regularly hook your shots out of bounds, we wouldn’t worry too much about changing the position of your forearms. You might find that in your efforts to correct yourself, you will lose a lot of your clubhead speed, and your shot trajectory will suffer as a result.

As the old saying goes, if it isn’t broken, don’t fix it! So many golfers roll their forearms at the point of impact, and it’s certainly not a bad thing. You only really need to make adjustments if you’re constantly hooking shots to the left.

What is Shallowing the Club and is it Important?

Shallowing the golf club refers to your efforts to flatten the clubface on your downswing. This is a correction as such because lots of amateur golfers come down on the ball too steep, which results in fat shots and slices.

While some people shallow the club naturally and don’t need to worry too much about the angle of the clubhead in the downswing, others need to manipulate the position of their arms to ensure they’re not coming down too steep.

Golfers may also like:  Scratch Golf Academy Reviews (Is it Legit Training?)

It’s important to shallow the golf club because failing to do so will result in poor shots more often than not – something that all golfers will hope to avoid.

Shallowing the club is the best way to hit more consistent shots as it enables you to be in full control of the clubhead at the point of impact.

Although shallowing the golf club will almost certainly feel unnatural at first, it’s something that you have to rectify if you’re struggling to hit your golf shots with any consistency. We explain how to shallow the golf club in the following section.

How Do You Shallow the Golf Club and Hit It Further?

To shallow the golf club, you need to keep your club more horizontal to the ground as you come down on the ball, which is achieved by using your wrists to move the club into a more shallow position.

Helpfully, this is actually super simple to do; you just need to drop the trailing arm and hinge the wrists at the top of your swing. That being said, it will take a fair amount of time and effort onto the range until you start seeing consistent results!

In the early days after making the correction, shallowing the club will feel unnatural. It may even cause some people to go far too square, which affects distance and ball trajectory as a result.

If you lose considerable distance after shallowing the club, you’ve probably squared things up a little too much.

Ultimately, shallowing the club will help you to hit more consistent golf shots, and you will see significant improvements in your long and short game as a result.

Mastering the Anti-Roll (Square Up) Method for Better Consistency!

While rolling your forearms in golf is perfectly natural, it’s common for golfers to follow through too much and hook the ball left as a result.

If this resonates with you, consider trying the anti-roll method in golf (squaring up) out on the range and see if it helps you hit longer and straighter golf shots.

Both rolling and square forearms are used by players at all levels of the game, so it’s important to find a technique that works well for you and complements the other aspects of your setup.