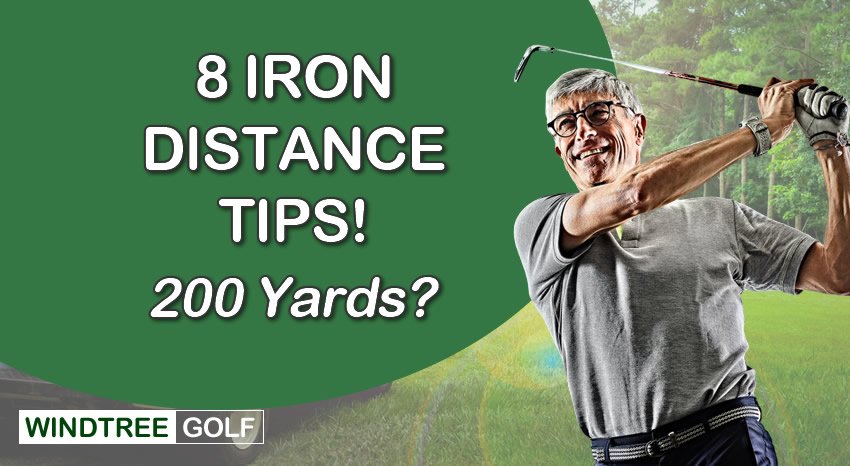 Your short irons are really important to your overall golf game, as they dictate how accurate your approach play will be. And while many beginners focus on their 7 and 9 irons, it also makes sense to practice out on the range with an 8.

In this article, we explain how far you can reasonably expect to hit an 8 iron in golf. We also look at some of the things that might be affecting your ball striking and make some suggestions on how to improve your iron play.

By the end of this piece, you will have all the information you need to practice with your 8 iron distance in mind and hopefully see a significant improvement in your short iron play as a result.

How Far Should a Beginner Hit an 8 Iron?

A beginner golfer should aim to hit an 8 iron anywhere between 120 and 140 yards. The distance will depend on the mechanism and speed of your swing, so it’s hard to say exactly how far you will be able to hit your 8 iron.

The key thing to remember when you’re new to the game is not to try and hit the ball too hard. When you focus too much on swing speed, you will neglect the need to improve the dynamics of your swing, and you will find it difficult to strike the ball consistently.

When you’re out on the range, swing through the ball and don’t try to hit it further than you can naturally hit it. Anything over 120 yards for a beginner golfer is a good distance to hit an 8 iron, so don’t worry too much about trying to make some extra yards.

In the following sections, we provide some top tips on how to improve your ball striking with your 8 iron, which we hope will help you bring those scores down this season.

There are several reasons why you could be hitting your 8 iron short. One of the main reasons is that you’re gripping down on the club, which is something that lots of beginner golfers do to feel more in control of their shots.

Gripping down on the club sacrifices some distance, so you can try moving your hands up to the center of the grip. Another reason why you might be hitting your 8 iron short is due to your swing speed.

Although we’ve mentioned that you shouldn’t try and hit the ball too hard, if your swing speed is particularly slow, you will struggle to hit the ball the required distance.

The range is the ideal place to try and speed things up ever so slightly, and you can see if it makes any difference to the distance that you can hit an 8 iron.

But again, don’t try and hit the ball too hard, as you will almost certainly struggle to make the desired connection.

One other thing to consider is the length of your clubs. If you’re using an 8 iron that is too short for you, you will struggle to hit it a considerable distance. This is why it’s a good idea to go for a custom fitting before settling on the right clubs for you.

If you want to hit an 8 iron longer than 150 yards, you will need to increase your swing speed. This is something that occurs naturally as you get more experienced in golf and is certainly not to be rushed! If you swing the club too fast, it will have an adverse effect on your ball striking.

So, instead of trying to smash an 8 iron further than you can currently hit it, it makes much more sense to work on all of your irons, so you can hit them the desired distance.

For instance, if you’re able to hit your 7 iron 150 yards, why do you need to try and hit an 8 the same distance?

This is where vanity creeps into golf, as lots of players want to be known as the biggest hitters out there. While it’s certainly impressive when Tour pros tank shorter irons 200 odd yards, it doesn’t mean that we should all try and replicate their achievements.

Rather, it’s much better to work on your general swing and improve your ball striking progressively. That way, you can improve your club selection out on the course and be confident that the iron you pull out of your bag will go the desired distance.

For more insights on how to hit an 8 iron as far as possible, (with better accuracy) – watch the 8 iron challenge!

How Fast Should I Swing My 8 Iron?

The average club head speed of an 8-iron for recreational players is 87 mph. However, PGA Tour professionals have an average swing speed of 115 mph for the same club.

So, if you have a launch monitor and are working on your swing speed, aiming for anywhere between 90 and 95 mph will see you achieve an above-average swing speed for an 8 iron.

There’s no doubt that increasing your swing speed can improve the distance that you hit your golf shots, but it’s not the only important thing to be concerned about.

As mentioned, solely focusing on your swing speed will have a detrimental impact on other aspects of your swing, so don’t just try and hit the ball hard for the sake of doing so.

As a recreational golfer, it’s much more important to perfect your rhythm, as opposed to worrying too much about achieving exceptional swing speeds, particularly when you’re still relatively new to the game of golf.

If you’re keen to increase your swing speed, it’s a good idea to do it with the help of a coach, as they will be able to help you do it without negatively influencing all the other components of your swing.

What About the Ideal 8 Iron Launch Angle?

The perfect launch angle for an 8 iron should fall between 18 and 21 degrees. However, you should be aware that every golfer is slightly different as far as launch angle is concerned, and people can hit perfectly good shots that fall on either side of this range.

Launch angle is a relatively new metric, and it’s not something that every golfer considers. After all, we don’t all have access to launch monitors, meaning it can be difficult to work out the angle at which the ball takes off after making contact.

In the interests of keeping things nice and simple for you, we would go as far to say that you shouldn’t get too caught up with your launch angle. By all means, work on it when you have the chance to use a launch monitor, but don’t spend too much time trying to work out and improve your launch angle.

There are several factors that influence how far you can hit an 8 iron, and every player is capable of different distances. This is why it’s never a good idea to base your distances solely on what other players are capable of, which is a mistake that many beginner golfers make.

Still, to give you a rough idea of how far you should be aiming to hit an 8 iron, you can use this 8 iron distance chart as a guide:

Golfers may also like:  Are Chippers Legal in Golf? (The Rules!)

The fact that some professional male golfers can hit an 8 iron 200 yards is scary! The swing speeds that they achieve and the power they get behind the ball is so impressive. But that being said, it’s not something we should all necessarily aspire to!

Golf is most enjoyable when you feel comfortable out on the course. So, instead of merely trying to hit every shot as far as possible, take the time to work out your distances with each club and take the necessary steps to improve your ball striking.

How Far Do Tour Pros Hit an 8 Iron?

Male players on the PGA Tour aim to hit an 8 iron between 160 and 200 yards, while professional women players aim for anything between 130 and 145 yards.

Professional players are able to achieve such distances due to their impressive swing speeds and the fact that they achieve the right launch angle on each shot.

Given that Tour pros are elite players, it’s little surprise that they’re able to hit their irons so much further than recreational players.

However, it motivates some of us to try and replicate some of their achievements by seeing how far we can hit the ball out on the range.

Our position throughout this article has been to recommend that you work on your technique and consistency of ball striking rather than trying to radically improve your swing speed.

Merely trying to hit the ball harder doesn’t usually have the desired effect, so it’s important not to fall into the trap of thinking that hitting the ball harder makes it go further!

So, now you know how far most people can hit an 8 iron, spend some time out on the range working on your swing, and give yourself the best chance of improving the consistency of your ball striking this season.