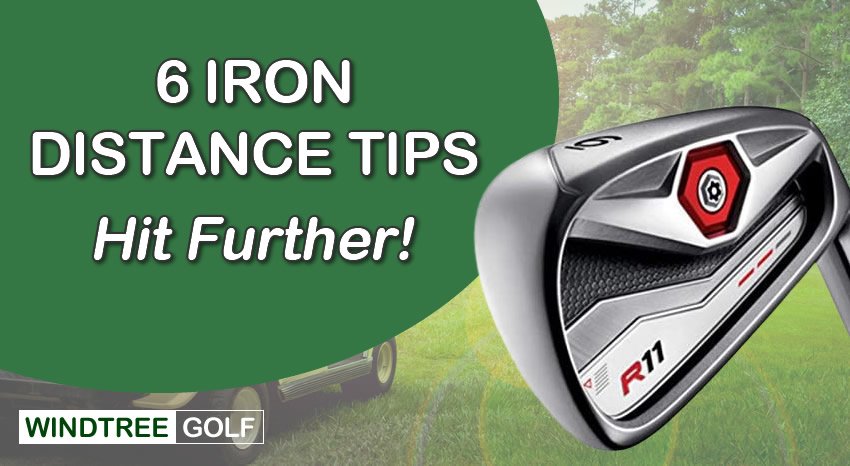 Calculating your distances is a hugely important part of golf. After all, if you don’t know how far you can hit the clubs in your bag, it’s nigh on impossible to pick the right shot!

With this in mind, how far should you hit a 6 iron? What can you do to improve your ball striking with your mid-irons? And how far do Tour pros hit a 6?

Below, we explain everything you need to know about hitting a 6 iron and offer some of our top tips that will help you hit straighter and more powerful shots with your irons.

What Distance Does the Average Golfer Hit a 6 Iron?

Most male recreational golfers can hit a 6 iron approximately 150 yards, while female golfers look to hit a 6 iron between 130-140 yards. If you have a faster swing speed, you might be able to hit a 6 iron 160 or 170 yards.

But when you’re just starting out in golf, you should be pretty content with 150 yards base distance.

Understanding your distances is super important as far as course management is concerned, and it’s a huge part of the game. If you don’t know the distances that you can hit consistently, you’re essentially guessing when it comes to club selection.

The best way to work out your distances is to spend time on the range with each club, paying attention to where the golf ball lands.

You should also think about carry distance, as you might be able to hit a 6 iron 170 yards in the summer when the ground is hard, but you will struggle to hit it any further than 150 when the grass is wet.

This makes a big difference to your shots, so make sure you take this into account when calculating your distances.

What Factors Determine Your 6 Iron Distance?

One of the main factors that determine a 6 iron club distance is the swing speed. If you have a particularly fast swing speed (90+mph), you might be able to hit your 6 iron further than most golfers.

But given that the average clubhead speed for most recreational golfers is between 80-90mph (male) and 65-75mph (female), 150 yards is a good distance to aim for with a 6 iron.

Another factor to consider is the type of clubs that you’re playing with. Golfers with bladed irons can typically hit a 6 iron further than those who play with cavity-backed clubs.

But as most beginner and game improvement irons are cavity-backed, most recreational players won’t carry the ball as far as lower handicappers who use bladed clubs.

Finally, you need to think about the weather. As mentioned, if the ground is hard and dry, you can potentially get another 10-20 yards out of your 6 iron. But if the ground is soft and wet, the ball won’t carry much further than 150 yards.

How Do You Hit a 6 Iron Better?

The key to hitting a 6 iron better is practicing your technique out on the range. One mistake that beginner golfers and high handicappers often make is that they try and hit the golf ball too hard.

When you watch pros on TV, their swing speeds are nothing short of exceptional. And it’s only natural to want to replicate guys like DeChambeau and Woods who hit the ball ferociously hard.

But in reality, the key to improving your ball striking is actually slowing things down in your swing. It’s much more important to strike the ball with the center of the clubface than it is to swing like the wind!

You will find that by slowing things down ever so slightly, you can improve the dynamics of your swing and identify aspects that you can work upon.

While this might sound counterintuitive to some people, try it out the next time you’re on the range, and you will almost certainly see some improvements!

When Should I Use My 6 Iron?

You can use your 6 iron in various situations out on the course. For instance, when you’re in the center of the fairway, and you know you’re about 150 yards out, the six iron is the perfect club to grab.

A 6 iron is also a good club to turn to when you’re in the rough and you have about 130-140 to go, as the ball won’t carry as far when you play it from the long grass. As you can see from these two examples, club selection is one of the most important parts of the game!

You might also use a 6 iron off the tee when you’re on a par three. You just need to think carefully about the green and what type of shot you need to play, as a six-iron is typically played with a flatter trajectory than 7 and 8 irons.

In other words, you can use a 6 iron no matter where you find yourself on the course, but the key is to think about the distance it can carry. Any shot that requires you to hit the ball around 150 yards is ideal for your 6 iron.

What is a Good Swing Speed for A 6 Iron?

Most recreational golfers have a swing speed around the 80mph mark. While you might swing your driver slightly faster than this, 80mph is more than fast enough for your mid-long irons like a six.

We’re of the belief that recreational golfers shouldn’t spend too much time worrying about swing speed, as it can detract you from the other important aspects of your game. If you’re just trying to hit the ball as hard as you can, you will give up a lot of control.

As is the case when you’re hitting other clubs, focus on the rhythm of your ball striking and make sure you follow through with your 6 iron. You don’t need to adjust your swing speed just to be able to hit a six, and doing so will affect your accuracy and ball flight when you’re out on the course.

While Tour Pros might clock swing speeds in the mid to high nineties when drilling a 6 iron in a tournament, you don’t need to try and replicate this feat! For most recreational golfers, swinging the club too fast results in a mishit and is something to be avoided at all costs!

Although every golfer is different, the following chart will help you work out if the distances you’re getting with your 6 iron are about right for your level of ability:

Long hitters are elite players at the top of their game, and tour players need little introduction!Short hitters include high handicappers and beginners, as well as senior players. Mid-hitters are those that have a good grasp of the amateur game and can play golf to a good standard.

Most recreational golfers should be content with hitting a 6 iron around the 150-160 yard mark. If you try and increase your swing speed in an effort to hit your irons further, you can actually upset the rhythm and effectiveness of your swing.

As such, if you’re hitting your six iron around this length already, you don’t have to do a great deal of work on the range.

How Far Do PGA Tour Pros Hit a 6 Iron?

Most PGA Tour pros are capable of hitting a 6 iron between 180 and 230 yards. This is quite remarkable when you think about it, meaning they can technically hit the same club as recreational golfers more than eighty yards further.

However, don’t make the mistake of trying to replicate the pros when it comes to distance. Remember that pros play golf courses that are much longer than those that most amateur golfers are used to.

It’s not uncommon for the pro tees to be at least fifty yards further back on championship golf courses, so their distances need to be that bit further than recreational players!

Given that many recreational golfers are happy with drives that go 200+ yards, it would be unrealistic to start trying to hit a 6 iron the same distance.

While we can all appreciate the distances that pro golfers are capable of with their mid irons, it’s not our place to try and replicate their achievements.

Instead, focus on your technique, rhythm, and ball striking, and you will see improvements in the way that you hit your 6 iron out on the golf course.

The 6 iron is a club that many recreational golfers overlook in favor of a 5 and 7. But it’s a good club to carry in the bag, and it can be useful in a range of situations out on the course.

As explained, most recreational players should be looking to hit a 6 iron around the 150-yard mark, but you might be able to hit it further when the ground is hard.

As much as you might like to, don’t spend too much time trying to replicate the tour pros because it’s very unlikely that you will be able to cream a 6 iron 220+ yards!