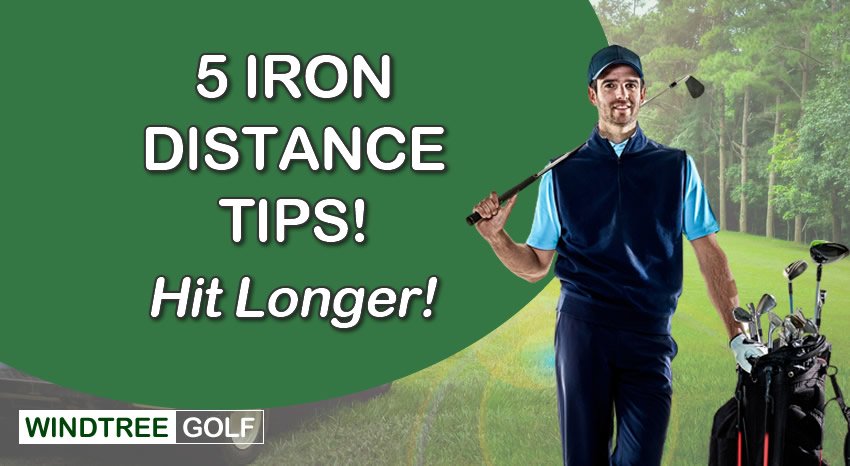 When you begin playing golf, the five iron is one of the first clubs that you try and hit. After all, it enables you to get the ball down there without turning to your woods or drivers and is easier to hit for most players.

But how far can you reasonably expect to hit a 5 iron? And when should you turn to your 5 iron when you’re out on the golf course?

In this article, we take you through everything you need to know about your 5 iron and provide you with some top tips that will help you hit your iron harder and longer this season.

What Distance Does the Average Golfer Hit a 5 Iron?

Most male recreational golfers can expect to hit a 5 iron between 150 and 170 yards. There are several factors that affect this distance, including swing speed and launch angle, as well as ball striking consistency.

What’s more, many beginner golfers use cavity-backed irons, which typically don’t go as far as bladed clubs. So, when you’re pulling the 5 iron out of the bag, it’s really important to take these factors into consideration.

Don’t forget that every single golfer is different, so the distance that you can hit a 5 iron is likely to be different from your playing partner.
This is nothing to be concerned about; it just illustrates the importance of working out your distances as far as course management is concerned.

So many recreational golfers struggle with their distances, and it’s largely down to the fact that they don’t know how far they can hit the clubs they carry in their bag. If you can dial in and have a good understanding of how far you can hit your irons, you will find that things become much easier from tee to green.

What Factors Indicate Your 5 Iron Distance?

The main factor that influences your 5 iron distance is your swing speed. Recreational players are much more conservative when it comes to swing speed, which is why they don’t hit the same heights as the pros.

Professional players are capable of extremely fast swing speeds, which is what helps them to launch the ball so far and high.

Another factor that affects the distance that you can hit a 5 iron is the type of clubs that you have.

Golfers may also like:  2 Iron Golf Club: 11 Facts you Need to Know!

As mentioned, cavity-backed golf clubs that are popular with beginner players compromise some distance in favor of forgiveness, so you can’t expect to hit a 5 as far as someone who is using bladed irons.

Launch angle is another important consideration when it comes to the distance of your 5 iron.

The launch angle refers to the angle of your club throughout the swing, and it causes the ball to fly in a specific direction. If your launch angle is out, it will undoubtedly affect the distance you can hit a 5 iron.

Something else you should consider is the weather. When you’re playing golf in the winter months when the grass is wet, you won’t be able to hit the ball as far as you can in summer when the ground is dry. Although it will only influence your shots by a few yards, it’s still worth thinking about.

Hitting a good 5 iron shot requires practice, but here are some of our top tips for executing a great shot with this popular mid-iron:

Watch this video from Golfers Digest, where they give you some great tips on how to hit a 5 iron to 200 yards plus!

When Should I Use My 5 Iron?

You should use your 5 iron when you’re approximately 160 yards away from the green. This could be on the tee of a par three or down the fairway on a longer hole.

You can even use a 5 iron in the rough or out of a sand trap if you wish, but it’s difficult to achieve the desired ball flight from more difficult lies.

Some golfers also use a 5 iron to play chip and run shots around the green, which can be an effective way of getting the ball close to the pin if the conditions are right. That being said, pitch and runs are relatively difficult to execute, so it might not be the best shot choice if you’re new to the game.

Essentially, once you’ve worked out your distances, you can use a 5 iron when it’s appropriate to do so.

Just be mindful that because of its loft, you might find it difficult to play a 5 iron out of deep rough, so it’s helpful to opt for a higher lofted club just to get you out of trouble.

Knowing your distances is super important for course management, and when you get into the swing of things, you will instinctively know when it’s appropriate to play your 5 iron out on the course.

What About Swing Speed for a 5 Iron?

The average male golfer can expect to hit a 5 iron with a swing speed of around 94 mph. So, if you have a Trackman or any other launch monitor, you can use 94 mph as your target club head speed when using a 5 iron.

It’s much better to focus on the dynamics and tempo of your swing, as this will help to improve the consistency of your ball striking. If you’re overly concerned with the speed of your club, you can fall into the trap of prioritizing speed over quality of strike.

As you might expect, this can lead to your swing being out of sync and is likely to have a negative impact on various other aspects of your game.

As every golfer is different, it’s important to realize that not everyone will be able to hit a 5 iron the same distance. The 5 iron distance chart is a helpful guide to get started with and showcases how far you can reasonably expect to hit a 5 iron on the golf course:

The distances that professional golfers achieve with their mid-irons are seriously impressive, and the fact that players on Tour regularly hit a 5 iron in excess of 200 yards is staggering!

They achieve such impressive swing speeds, and the mechanics of their swings are so pure, which enables them to achieve such big distances with irons.

For mere mortals, a 5 iron is a mid-iron that can be called upon from the 160-yard range and often comes into play on par 4s. But if you’ve got a particularly fast swing speed, you might be able to hit your 5 iron further than what is considered standard, which is why it’s so important to calculate your own distances.

Again, every golfer is different, so be sure to consider how far you can hit your 5 iron before taking to the course this season.

Professional golfers can hit a 5 iron in excess of 200 yards. When he’s at the top of his game, Tiger Woods regularly hits a 5 iron 210 yards.

As he’s widely considered to be one of the greatest of all time, it’s no surprise that Tiger can achieve such distances with a mid-iron.

Another player who has a super impressive distance chart is Dustin Johnson.

DJ is widely regarded as one of the longest players on Tour, and he can hit a 5 iron around 225 yards. That’s outrageously far and just goes to show how impressive his clubhead speed and ball control are.

As for the popular Northern Irishman Rory McIlroy, he falls somewhere between the two Americans and is known to hit his 5 iron around 220 yards.

These guys are all at the top of their games on the PGA Tour, and their numbers give you a rough idea of how far most Tour pros can hit their irons.

So, even if you don’t think you’ll be able to smash your 5 iron more than 200 yards, there’s no doubt that with a bit of work on the range and some additional practice, you can start striking your 5 iron sweetly out on the golf course.

The 5 iron is one of the most important clubs in your golf bag. It comes into play in various instances out on the course, so hitting it true is really important. It’s also crucial that you know how far you can hit a 5 iron, so you can improve your course management.

We hope this guide has provided you with detailed insight into hitting the 5 iron distance out on the golf course. Make sure you spend some time out on the range working on your irons and be sure to note down how far you’re capable of hitting each club.