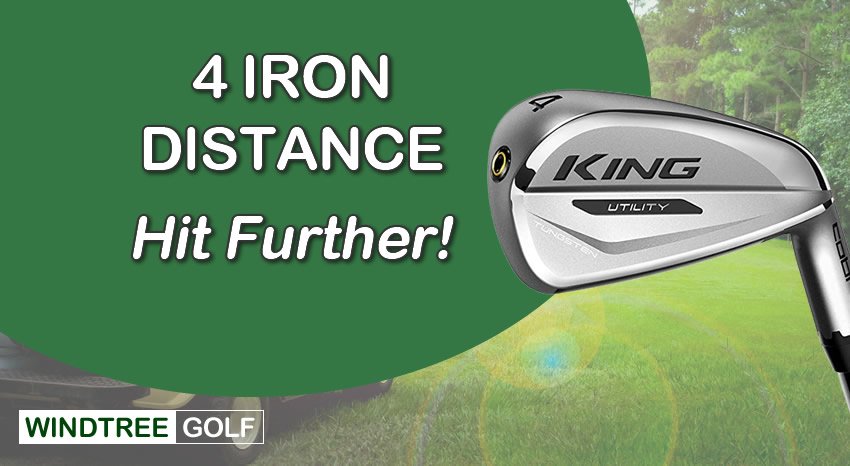 Mastering your iron play is key to success as a golfer. You need to be aware of your distances and have the confidence to hit the ball high and far as you approach the green.

And given the popularity of hybrid clubs today, the longest iron that many players carry is a 4 iron. But what’s the best way to hit it? And how far can you reasonably expect to hit your 4 iron?

Below, we answer all these questions and more as we explain how to get the most out of your trusty 4 iron this season.

What Distance Does the Average Golfer Hit a 4 Iron?

The average distance a male golfer can hit a 4 iron is anywhere between 150 and 180 yards. Senior players and women golfers can typically hit a 4 iron between 120 and 150 yards in most instances.

Of course, every golfer is different, and you might find that some recreational golfers can hit a 4 iron further than 180 yards. Some players can also hit a 4 iron further off the tee than they can directly from the grass, which is also worth thinking about when working out your distances.

Given that not every player carries a 2 or 3 iron, a 4 iron is often the longest iron that many golfers carry in their bags. 2 and 3 irons are often replaced by hybrids, which are much easier to hit.

So, to help you with your club selection and ensure that you use a 4 iron from the correct position out on the golf course.

We explain everything you need to know about this long iron in the sections that follow.

What Factors Determine Your 4 Iron Distance?

There are 3 main determining factors that dictate how far you hit a 4 iron. These are swing speed, ground hardness (seasonality), and wind. These reasons are why your 4 iron distance might vary from day to day and even season to season.

If you have a particularly fast swing speed and you can hit the ball consistently well, it’s likely to travel further.

Another thing that will affect the distance of your 4 iron is the season. When you play golf in the summer, the ground is much more likely to be hard, and the ball will carry and bounce further than it does during winter golf.

Conversely, when you play golf in the winter, you will find that the ball gets stuck in the grass more and doesn’t roll as far down the fairway.

Depending on the conditions that you’re used to, the season can affect your 4-iron distance by as much as 20 yards either way.

Of course, the wind can also affect the distance of your 4 iron. If you’re hitting the ball into strong winds, your distance will be significantly reduced, and vice versa.

How Do You Hit a 4 Iron Better?

The key to hitting a 4 iron better is practicing out on the range. While lots of players aspire to hit the ball really hard with a fast swing speed, the reality is that recreational golfers typically benefit from slowing things down.

After all, if you try and hit the golf ball too hard, your consistency is likely to suffer as a result, as it’s much more difficult to stay in control of your ball striking.

When you’re practicing your iron play on the range, deliberately slow things down so you can review the mechanisms of your swing.

Then, if you find that you’re slicing or hooking the ball, you can work on your address and set up to ensure you’re square before taking a swing.

As well as slowing things down on the range, another way to improve your ball striking with a 4 iron is to adjust your posture.

Straightening your back and throwing your hands out after impact will help you execute better shots consistently and will reduce the number of errant shots you hit with your 4 iron.

Watch this short video from the Bunkeredonline YT channel which gives you some quick tips on how to hit the 4 iron better:

When to Use a 4 Iron on the Course?

In the main, use a 4 iron on a par 3 or short par 4, you can tee up with a 4 iron and comfortably hit the ball 150+ yards. Beginner golfers who struggle to hit drivers and fairway metals often turn to a 4 iron, as it helps to get the ball down there as they’re working on their driving.

Golfers may also like:  One Length Irons Reviews (Do They Make a Single Difference?)

It’s also a good idea to turn to your 4 iron when you find yourself on the fairway or first cut with around 150 yards to go to the front of the green.

Just remember that landing a 4 iron softly isn’t straightforward, so you will need to allow the ball enough space to roll up to the pin.

Another spot that you might benefit from using a 4 iron is when you need to play a low-flying shot to avoid hanging branches when your ball is in the rough.

When you close the clubface of a 4 iron, you can drive the ball towards your target, confident that it won’t achieve a great deal of height.

In other words, a 4 iron is an extremely versatile club to keep in your bag, and you can use it from different positions out on the course.

What is a Good Swing Speed for A 4 Iron?

Recreational players seek to increase their swing speeds to gain an advantage out on the course. If you manage to hit your 4 iron consistently with a swing speed around the 95mph mark, then this is classed as a good speed.

The average male golfer has a swing speed of around 85mph, while women typically swing the club at around 65mph. As is the case with most irons, achieving an average swing speed is ideal when you’re using a 4 iron as a recreational player.

On the PGA Tour, male golfers average a swing speed of 137mph when hitting a 4 iron, while women on the LPGA Tour achieve swing speeds of around 116mph.

Although swing speed is important, you shouldn’t spend too much time worrying about how fast you swing the club.

Instead, you need to work on the rhythm and consistency of your swing, which is much more crucial to the way in which you hit the golf ball than achieving rocket speeds with your swing.

When you’re calculating your distances out on the golf course, it’s important to remember that every golfer is capable of different things.

You might be slightly below average or slightly higher than average as far as distance is concerned, but it’s important to know how far you can hit each club.

Golfers may also like:  Golf Stance for Irons: 7 Easy Tips to Improve Your Game!

Below is a 4 iron distance chart that you can reasonably expect to hit this mid-iron:

If you consider yourself to be a long hitter, then you should be aiming to hit your 4 iron between 180-200 yards, which can set you up nicely for your approach shot without having to pick a fairway metal out of the bag.

The above distances are accurate for men, so women and senior golfers are likely to hit a 4 iron slightly less distance than those given in the table.

What Yardage Do Pros Hit a 4 Iron?

Players on the PGA Tour can hit a 4 iron anywhere between 205 and 250 yards. This might surprise you, as this is the distance that some recreational golfers are able to hit their drivers.

But remember, professional golfers work on their swing speed and rhythm consistently and they’re performing at the elite level of the game every single week.

When you see these types of numbers, it’s important not to get too carried away with trying to replicate them.

Just because Bryson DeChambeau can send a 4 iron 250+ yards down the fairway, it doesn’t mean that we can all do it!

If you try and hit the ball too hard and focus less on the natural rhythm of your swing, you will almost certainly end up hitting a poor golf shot.

So, instead of trying to replicate the distances that you see on the PGA Tour, be content with the current distance you achieve with your 4 iron, and practice consistency with the clubs in your bag.

A 4 iron is a really important club as you can use it in so many instances out on the golf course. Whether you’re teeing it up on a par 3 or playing your second shot on a par 5, a 4 iron will help you get the ball down there.

As is the case with every golf club you carry in your bag, spend some time out on the range practicing your swing and ball striking, and you will have no trouble hitting your 4 iron distance consistently further into the future.